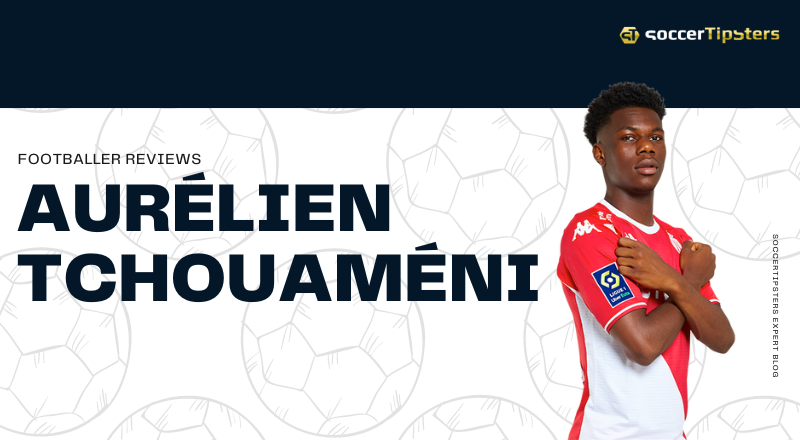 Aurelien Tchouameni is Monaco's new young talent, following in the footsteps of Kylian Mbappé and Tiémoué Bakayoko, or previously Jérôme Rothen and Patrice Evra, and even Thierry Henry. Tchouaméni, like the other players mentioned, has become a target for the major clubs in Europe at the age of 22. The Monaco midfielder, who was signed from Girondins Bordeaux in January 2020 for close to €18 million, has also earned the admiration of France coach Didier Deschamps. He knows better than anyone what it takes to succeed in the middle of the field.

Aurelien Tchouameni is a combative player on defense, pressing opponents aggressively and quickly enough to make interceptions, besides being strong in individual duels. Moreover, his ability to cover ground complement his understanding of the game. As a result, he can recognize when he must release the mark on one opponent to drive towards another. Typically, Tchouaméni is used as a defensive midfielder in a 4-2-3-1 or 4-4-2 formation, alongside Jean Lucas, Youssouf Fofana, or Eliot Matazo. Likewise, Monaco's attacking structure lays significantly on the full-backs. France has the most depth squad of any international team. However, Tchouameni's strong rise may see him make the starting lineup in Qatar 2022 despite competition in midfield.

Real Madrid is making strides toward signing several soccer players for the upcoming season. Although the focus is primarily on Kylian Mbappé, other names on the Madrid agenda will also play a significant role. This is the situation with Aurelien Tchouameni. In the last season and a half, the AS Monaco midfielder has captivated Europe with his physical ability, skill with the ball at his feet, and defensive work. He is indispensable to his team and frequently appears in French coach Didier Deschamps' plans for the French team. Indeed, he has a preferred position in a midfield that includes Kanté, Pogba, and Tolisso.

Aurelien Tchouameni is destined to make history in Europe because his performance continues to improve in the current season, despite the pressure of having all the greats behind him. He is already one of Europe's relevant star projects for the coming years. Therefore, clubs like Real Madrid have him on their radar in a big way. Furthermore, the player has become one of the world's fittest footballers.

Real Madrid is impressed with the performance of a player who made a big impression as a future player for the white team a few months ago. However, his progress and growth are also highly valued at home: "He is vital not only to the team's balance but also to his ability with the ball. He possesses all of the necessary characteristics to become one of the best in Europe in his position. However, he still needs to improve in some areas, and we are here to assist him in reaching his full potential ". This is how his coach, Phillippe Clement, described him recently. As we can see, Aurelien Tchouameni has already become a reality.

« Frenkie De Jong: The Crack Of The Netherlands