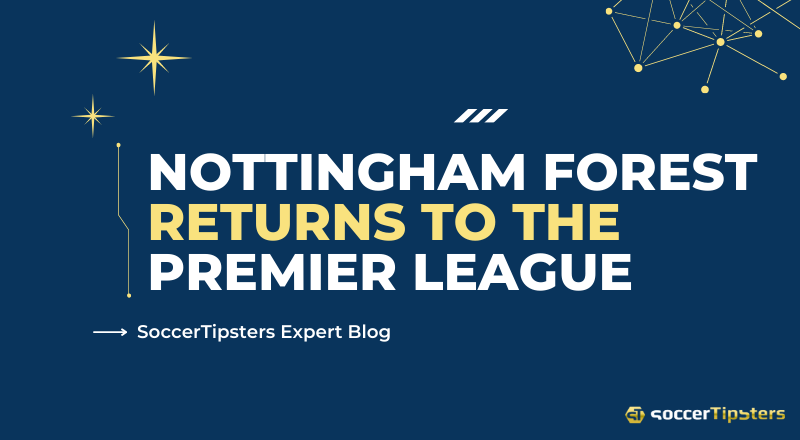 After the Champions League final between Real Madrid and Liverpool, English football fans had one of the best and most surprising news. The great team Nottingham Forest returned to the Premier League! This promotion was well-deserved for a team that is one of the most beloved by English fans.

In 1865 (157 years ago), the club was founded. This team immediately became very popular as it was the representative of the county of Nottingham -where the idyllic Sherwood Forest is located- home of that mythical character Robin Hood. The club has experienced numerous ups and downs since then. This team characterizes by upholding the banners of English legends and is much loved and respected by English fans. Besides, these fans have seen it relegated to the second division for many years, and it even went down to the third division, from where it soon recovered to move up to the second division. The team coached by Steve Cooper plays in the City Ground Stadium, which opened 123 years ago. This team is so old that a match in 1878 went down in history as the first time a referee used a whistle. In their history, they had two championships in the Champions League, one in the UEFA Super Cup, and also won a Premier League. But a long time has passed since they got these titles.

Altogether though, the team played 56 seasons in the First Division of English football before fading into the anonymity of the second division. But it is very well known that the English second division is as strong and competitive as the best first division of any other league. So, the technical level of the teams is impressive. And last season, coach Steve Cooper went to great lengths to assemble a club that would battle in the championship from day one. And so it was! The team left from the beginning of the season, looking for a promotion to the Premier. They finished the regular season in the fourth position to open a place in the championship, where they achieved promotion after defeating Huddersfield at Wembley 1-0.

This victory turned the long dream of 23 seasons in the second division into a glorious reality: to return to the Premier, where it belongs. One of the great responsible for the success of Nottingham Forest has been its right back, Djed Spence. This young man of just 21 years was born in London and came to Nottingham on loan from Middlesbrough. HE became the leader of the team and a real commander on the right wing.

He is a tall, strong, and agile player with total ball command and a great game vision. Besides, he has the clarity and patience necessary to know how to stop the opposing offense and organize attacking plays. Djed Spence's season was so impressive that several teams like Arsenal and Tottenham are already looking for his signing. Thus, it would be a critical loss for Robin Hood's team. But, with or without Spence, next season will bring Nottingham Forest's long-awaited opportunity to shine. Now, they may have the chance to be the great team they once were.