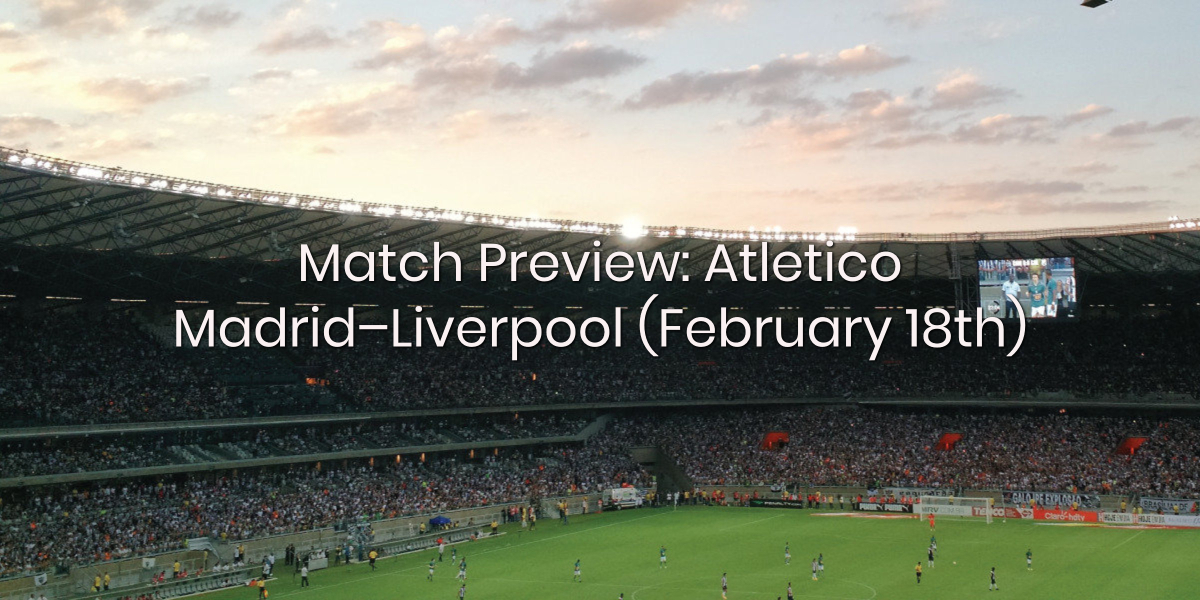 The UEFA Champions League action gets underway on February 18, as Atletico Madrid welcome the reigning holders Liverpool to the Estadio Wanda Metropolitano for the first leg of their Round-of-16 tie.

Atletico finished as the runners-up in Group D, six points adrift of Juventus and four clear of third-placed Bayer Leverkusen. But, Diego Simeone's men struggled to impress during the knockout stage, winning just half of their six group-stage fixtures while losing two of the other three (D1). But, two of Los Colchoners' three Champions League triumphs this season have come on home turf and have seen them shut their opponents out on both occasions. In fact, the La Liga giants have suffered just one defeat in their past 25 European fixtures at this venue (W20 D4), with their last home defeat in Europe dating back to the 2017/18 campaign.

Atletico will now be eager to improve their record from the 2018/19 season, when they succumbed to a 3-0 away loss to Juventus in the return leg of their last-16 clash, surrendering a two-goal advantage from the first leg. However, they will have to defy the odds to qualify for the quarter-finals, although they’ve sustained just one loss in their past five competitive H2Hs with Liverpool (W2, D2).

Meanwhile, Liverpool are on the verge of clinching their first Premier League title in 30 years, but they also have an eye on the second successive Champions League crown too. They will enter this encounter as slight favorites, even though they’ve failed to walk away from Madrid with all three points in both of their previous visits (D1, L1).

Except for a shock 2-0 away defeat to Napoli in the competition's curtain-raiser, the Reds enjoyed a comfortable group-stage campaign, finishing top of the section with a record of four wins, a draw, and a loss. All four of their triumphs in Group E saw the Merseyside heavyweights score at least two goals, with three of them coming via a multiple-goal margin.

But, the Premier League giants shipped eight goals in Group E, failing to keep a blank sheet in five straight matches before snatching a 2-0 away win over RB Salzburg in the closing round of the group stage matches. The clean-sheet theme seems to be out of the picture here too, as Liverpool have conceded exactly one goal in each of their last four competitive H2Hs with Atletico Madrid.

Simeone seems to have no other option but to put his trust in Joao Felix and Alvaro Morata to drag Atletico to success here. The Portuguese whizz-kid and the Spanish striker have bagged two goals apiece in the Champions League group phase, which is 50% of Atletico's total goals scored in the competition so far.

After scoring a winning goal in Liverpool's extra-time success against Flamengo in the FIFA Club World Cup Final, Roberto Firmino has opened his goalscoring account outside the Premier League, but Mohamed Salah will be the main threat to Jan Oblak. The Egyptian forward has found the net four times during the competition's group stage, adding two assists, while his partner in crime, Sadio Mane, bagged two goals so far.