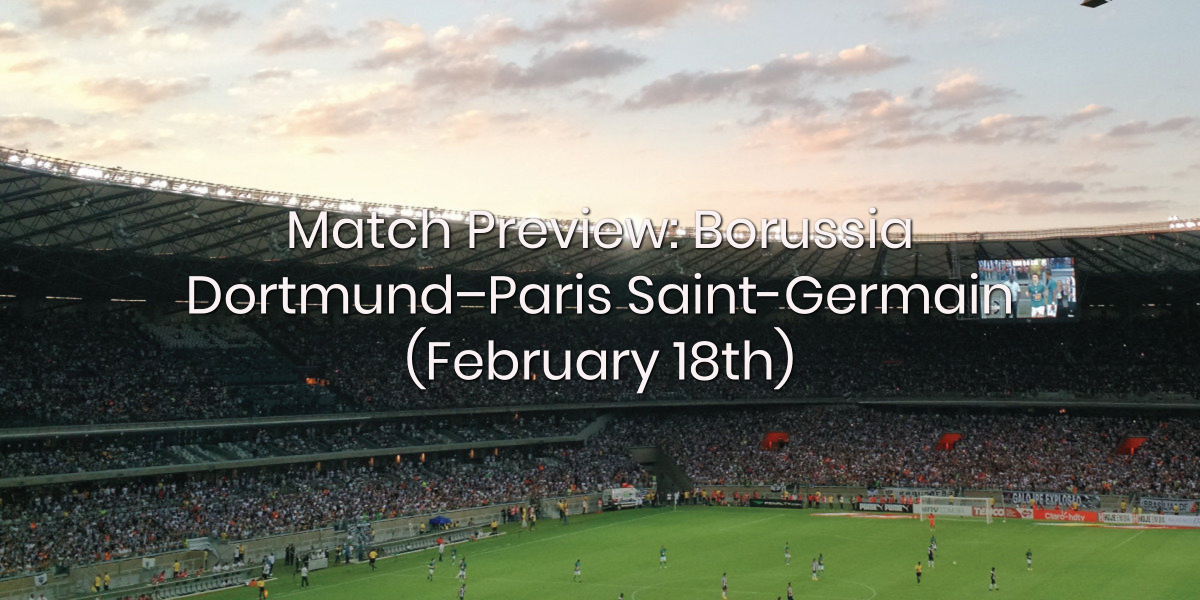 Borussia Dortmund and Paris Saint-Germain are drawn together in the UEFA Champions League Round of 16, with the first leg of their two-legged tie scheduled to take place at the Signal Iduna Park on February 18.

With a record of three wins, a draw, and two defeats, Borussia Dortmund finished as runners-up in Group F, and that's mainly thanks to Barcelona's 2-1 away win over Inter Milan in the final group stage match. A 2-1 home success against Slavia Praha that ultimately propelled them to the knockout stage has been only their fourth victory in their last ten Champions League home fixtures (W4, D3, L3). An indifferent home form in Europe could be a significant influence when they take on a side they've failed to beat in both of their previous continental meetings (D2).

If they manage to come out on top here, 'Die Borussen' will get on the scoresheet at least twice in all likelihood, as all four of their past European home victories saw them net over 1.5 goals. However, the BVB's dismal form in the Champions League could be setting them back in their bid to qualify for the competition's quarter-finals for the first time since the 2016/17 season. Indeed, Lucien Favre's men have picked up only four wins in their last 11 games in the most prestigious club competition in Europe (D2, L5).

Unlike Borussia Dortmund, who endured some rough time in their opening six games in the competition, Paris Saint-Germain enjoyed a remarkable Group A campaign. They finished top of their section, with a five-point lead over second-placed Real Madrid, winning all but one of their six group stage fixtures (D1).

The Parisians boast by far the best defensive record in the 2019/20 Champions League group stage, having shipped just two goals - both of which have come in a 2-2 draw with Real Madrid in Spain. Also, only Bayern Munich and Tottenham have scored more goals in the group phase than the reigning Ligue 1 champions (17). Curiously, PSG's away game usually sparks into life after the break, with all of their eight road goals scored coming in the second half.

PSG's free-scoring form in the Champions League has seen them find the net in 30 successive matches in the competition. What's more, Thomas Tuchel's men have registered four triumphs in their last five Champions League trips, with the abovementioned draw with Los Blancos being the lone exception.

Arguably the most highly-rated young forward in Europe, Jadon Sancho, will face a daunting prospect of netting his third Champions League goal of the season, but Favre might still have an ace up his sleeve. Real Madrid loanee, Achraf Hakimi, has been Dortmund's secret weapon during the group stage. The 21-year-old wing-back has scored four times in Group F, with two of those goals coming in a stunning comeback win over Inter in Germany.

The outcome of this two-legged tie will most likely depend on PSG's all-star trio - Neymar, Kylian Mbappe, and Mauro Icardi. While the Brazilian skipped almost the entire group stage campaign due to injuries, the latter two have been PSG's driving force. The French superstar and the Argentinean striker have scored five goals altogether, contributing to 58% of the Parisians' total goals scored in Group A.