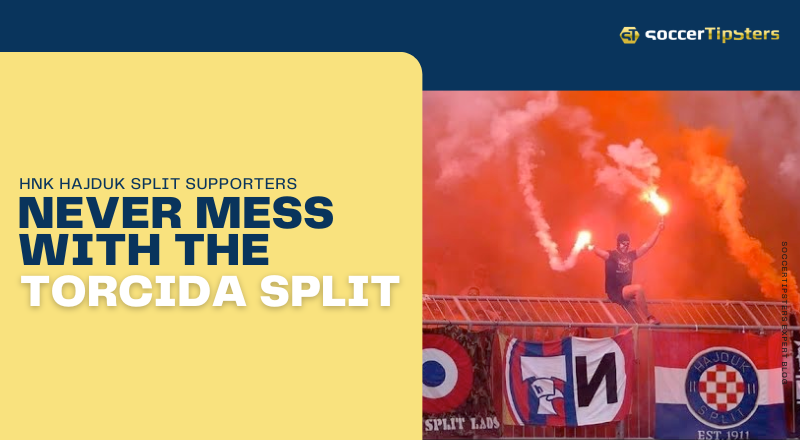 People experience football in Croatia with tremendous passion. There, football has been an essential part of the culture of the citizens through time. Later, Croatia became a country recognized for the quality of its footballers. Many of them have even belonged to some of the most prominent teams in the world. Besides, the Croatian National Team has been a great team for many years and continues to grow. The football world recognizes several Croatian teams, some of which got significant achievements in international tournaments. Meanwhile, others gained the respect of football fans for historical reasons. This is common among many teams in several parts of the world, and we mean those teams recognized for factors that have little to do with what happens on the field. This happens with the club Hrvatski Nogometni Klub Hajduk Split. You can also refer to them as Hajduk from the city of Split. This team is one of the most relevant in Croatia's First Division and won the Croatian Cup this year. The Hajduk Split club was founded 111 years ago. It is one of the most recognized teams in Croatia, and this is so not only because of its triumphs. Likewise, this team is famous because of its fans, particularly the so-called "Torcida" Split.

Because of political or social tendencies, many football teams have a profile, a personality. So, the story of Hajduk Split is fraught with much controversy. During World War II, the team was a great symbol against fascism, even internationally. So, the team and its fans took a hard line against the far right. But in 1950, a very different story began for the team and its fans. In October of that year, the "Torcida" was founded. The group's founders used this name as a greeting to the followers of Brazilian soccer. They are the oldest ultra group in Europe, which changed Hajduk's profile.

The "Torcida" members are known as explosive militants of the far-right, and thus, they give a twist to the club's personality. So, the team went from being recognized as standing against fascism to being the emblem of everything the club used to oppose. Over the years, the "Torcida" grew to maintain total control of all the team's fans. Unfortunately, this radical group has hurt the landscape of Croatian football with violence and abuse. The "Torcida" has starred in many episodes of violence since its foundation. Thus, the whole club gained a bad reputation. The "Torcida" characterizes by having zero tolerance against those who oppose its extremism. This group does not represent the whole of Croatian football. But, its episodes of violence and scandal have been so many. So, today, the Croatian authorities fear and follow this group's activities.

A perfect example of the chaos "Torcida" can cause happened a few weeks ago, after a match between Hajduk and their arch-rivals Dinamo Zagreb. There, over 1,600 members of the group took to the streets and clashed with the police after attacking Dinamo supporters. Indeed, the incident injured several dozen and became another stain for the "Torcida." Besides, it was also a new embarrassment for Hajduk Split.

Great Uncertainty In The Bundesliga 2022/23»