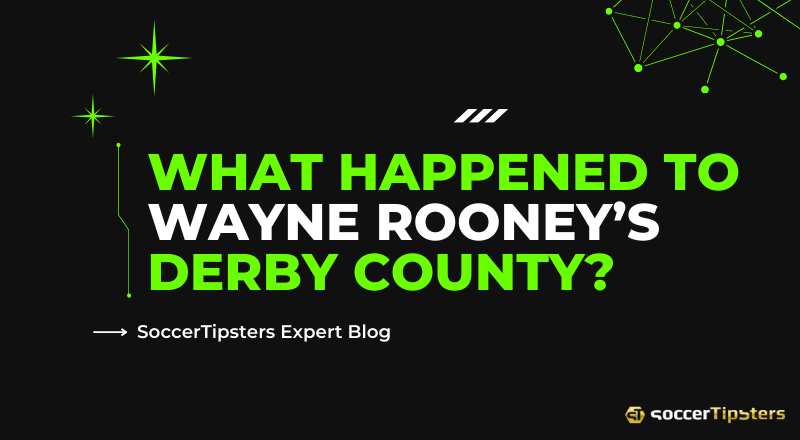 Despite having just retired recently, when we are talking about Wayne Rooney, we refer to one of the most iconic players in the history of English football. He was as controversial as a charismatic player, on and off the field. As an attacker, few compare to him. He has more than enough merits to be considered one of Manchester United's greatest legends. During the glorious seasons that Rooney played with United, he won every possible title. His achievements include 5 Premier League and a Champions League. Also, he is the best scorer in the team´s history, with 253 goals.

Rooney ended his active playing career with Derby County Football Club, to take over as the team's coach. This club plays in the EFL Championship (English second division) and has been going through financial problems for years. So, fans and Derby management hoped that Rooney would become a savior for the team. But, Rooney takes the position of Derby’s coach without having the necessary experience to deal with the Derby. Despite having been founded 137 years ago, this team has never had great participation in English football. Indeed, it has gone through a serious administrative crisis in recent years. But, Rooney's experience with the Derby has gone from bad to worse so far. Several factors have come together to create a mix of problems that have pushed the team to last place in the EFL.

It seems that wherever Wayne Rooney passes he always leaves a trail of problems. And it has been no different with Derby County. During a team training session in July this year, County star midfielder Jason Knight was injured by Rooney himself. Rooney had to participate as a player in a training session, as the team only had 9 players. So, Rooney tackled Knight and accidentally injured him. Later, that same week, the English press published some photos of Rooney in a nightclub with several women after his team's defeat in a preseason match. This fact was not well received and continued to fuel Rooney's bad reputation.

In September, the club's owner, Mel Morros, announced that he could no longer support the team financially. This generated a series of problems that led to the Derby going into administration. Thus, the EFL subtracted 12 points as a fine and later subtracted 9 more points in November, to a total 21 points less than the rest of the teams. This penalization has buried the Derby at the bottom of the table. Likewise, Wayne Rooney recently announced the existence of a possible buyer interested in acquiring the team. But, this negotiation would go through a series of scrutiny by the League.

Waiting For A Miracle

Regardless, Derby County's season has not been that bad in terms of results. Until now, the team has won 5 matches, with 10 draws (league leader), and 7 losses. Under normal conditions, they would have 25 points. Therefore, they would have no major worries to stay in the EFL. But, due to the 21 points that the league took from them, the team only has 4 points. Although Rooney assures that by the end of the season (May 2022) they will achieve the number of points necessary to prevent relegation, this sounds almost like a fantasy. But, doing so would be the biggest win of Wayne Rooney's career.