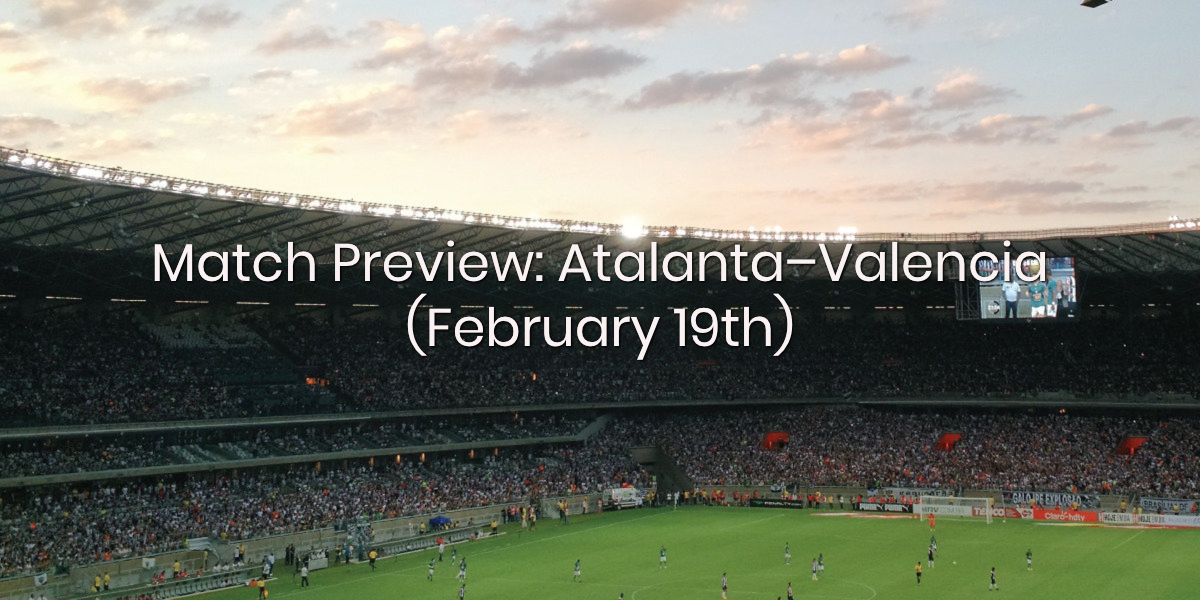 For the first time in the history of these two clubs, Atalanta and Valencia will lock horns in a competitive match. The Serie A side will take on the La Liga outfit at San Siro in the first leg of their two-legged tie in the Champions League Round of 16.

Atalanta have reached the Champions League group stage for the first time in the club's history, and they've made a spectacle out of it. Drawn in Group C alongside the likes of Manchester City, Dinamo Zagreb, and Shakhtar Donetsk, the Serie A side were given slight chances of reaching the Round of 16.

However, the Bergamo-based outfit finished second in the section, seven points adrift of top-placed City, and one clear of third-placed Shakhtar. But, the way they've kicked off their first-ever Champions League adventure suggested they might experience a nightmarish campaign.

Although they at first seemed unable to withstand Champions League pressure, Gian Piero Gasperini's men have made it into the last 16 thanks to a ferocious finish. Atalanta's journey in Group C started with three successive defeats, but a brave 1-1 home draw with Manchester City on Matchday 4 turned their fortunes around.

'La Dea' then made a breakthrough on Matchday 5, beating Dinamo Zagreb 2-0 at San Siro before sealing a place in the knockout stage with a 3-0 away success against Shakhtar. In spite of overseeing an upturn in results in their last three Champions League fixtures, the Serie A side still finished the group phase with a -4 goal difference (GF:8, GA:12).

Valencia have booked tickets for the Champions League Round of 16 for the first time since the 2012/13 season, finishing as the winners of the Group of Death. Indeed, Chelsea, Ajax, and Valencia shared similar chances of progressing from Group H ahead of the final matchday.

The Oranges faced a daunting prospect of picking up three points against the Dutch giants in Amsterdam to secure promotion, and a narrow 1-0 win at the Johan Cruijff Arena on Matchday 6 has propelled them to the knockout stages. Albert Celades' players failed to secure a single win in three group stage away fixtures in 2018/19 (D2, L1) but have won twice on the road this term by comparison. In fact, their stubbornness when on the road has proved vital in Valencia’s efforts to qualify for the knockout stage, with 63% of their Group H points coming away from home.

But, for Valencia, goals have been in short supply when away from home lately, which could be a stumbling block in their bid to kick Atalanta out of the competition. Los Ches have now scored one goal or less in each of their last 11 continental trips, qualifying included - with ten of those fixtures featuring under 2.5 goals. Also, they’ve run out winners only twice in their previous eight Champions League away games (D3, L3), with both of those successes coming via the same 1-0 score.

Although Mario Pasalic leads the way with two goals scored in the group stage, Atalanta's success in this tie will depend on Alejandro 'Papu' Gomez, who has been the club's standout performer over the past couple of seasons. The Argentinean wizard has recorded a goal and an assist in the ongoing Champions League campaign but has been a highly influential figure when it comes to Atalanta's build-up play and their displays in the attacking third.

Rodrigo Moreno is going through a torrid season by his standards, but he will, nonetheless, represent the biggest threat to Atalanta's goalkeeper, Marco Sportiello. The 28-year-old forward has found the net only twice in Europe this season, but both of his goals have come away from home and turned out to be the match-winners.